A Short day today. Our only real direction is to ride the Atlantic highway.
But first a quick side trip the the Troll wall a famous 1000m climbing face of loose rock and ice with an overhanging top of the route. Unfortunately the top was in cloud but apparently that's not unusual. I guess it's a cross between nth face Eiger and the hideous Scottish wet winter snow climbs. 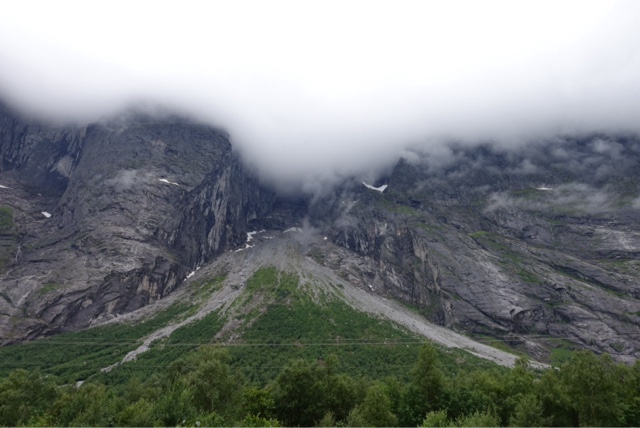 Extremely low speed limits 50-60 most of the way made this ride pretty frustrating. The first glimpse of the Atlantic and the "Highway" was the smattering of low lying rocky islets strung along the coast. It's green and pretty and we have bright sunshine. The high way is only about 60km of islets linked by bridges which is impressive but as a motorcycle ride it's pretty lame, soon enough your in a massive tunnel on the way to Kristiansund. It's a bit like the sky bridge between Stanmore tops and Woollongong in Australia, ie looks great in the motorcycling mags but when your on it its not as impressive and it's all over in a øjeblik (eye blink).
Kristiansund was about as far as we could bother so we scoured the tow for a centre. Alas it's missing the town has no real centre and it took us several spiralling laps breaking a few road rules to find an open cafe with wifi. I understand Kristiandsund was heavily bombed during WWII which would account for the lack of charm.
We found great accomodation at place called "Homes" (owned and run by the very talkative Johanas Holmes who lives upstairs). It is a set of rooms in a converted basement for 100auds. It was clean basic and 1/3 the price of anywhere else. Guests also have use of his fantastic garden where we sat and chatted to other travelers before a squadron of myge (midges) descend and lay siege.
On arrival we noticed a large Turkish presence so expected there might be a great Turkish restraunt. Sure enough right on the waters edge we found one and had some extraordinarily tasty Turkish fare and a bottle of Italian red.