Its summer here in Denmark although you wouldn't know it. We have had some gloriously sunny days but today is not one of them so no big adventures just little ones. Like, out with the camera and off to the coffee shop via  slotssøen (The castle lake)

After much net surfing I finally deciphered the Garmin turn by turn route planning process. I have  now loaded my favourite twisty ride to date from several sources and my unreliable memory.

The sun was out so I headed north to test it. Yippee It worked perfectly and I rediscovered the incredible ride I found about a month ago but thought I'd lost forever. To celebrate I stopped in Silkeborg for a coffee. Mmmm very average latte for $8 AUD this coffee situation is dire

Finally the BBQ is set.

After lugging my rather expensive and very cool BBQ all the way from OZ it was a little disheartening to find all the gas fittings etc were wrong. So no BBQs or as they say here "grills"

It has taken a few weeks to suss this out but after many trips to hardware stores, caravan shops and servos I have been directed to a gas specialist shop about 35k away in Haderslev. So onto the Beemer and south to the industrivej (every town seems to have an Industrivej - street name meaning industry st) in Haderslev to find the Kosan gas centre. Well the guy couldn't have been more helpful. We spent some time trying to find correctly threaded adaptors with no success. We did however confirm that my regulator was equivalently spec'd to the DK ones. Finally we chopped off my old regulator and headed into kitchen to find some dish washing liquid and hot water to force fit the Aus tube onto a DK regulator. Success. After some testing and many hints on how to find cheaper gas and bottles across the boarder in Germany (remember this guy works for the gas company) I was riding north to Kolding.

Now for a gas bottle. This is another expensive step as the bottles here are very light weight fibreglass and see through so cost about $150AUD. Every service station or hardware person I talked to chuckled and quipped when I asked about buying the first bottle. At least after the initial reaming it's the same process as in OZ ie exchange for a full one  at any servo or hardware store for about $28AUD.

Now with the full bottle strapped to the back seat of the Beemer and the hardware guy giving me "nice knowing you" looks whilst asking if I had far to travel, I rode home for install and steaks.

Today we decided to head to Fyn the central main island of Denmark. We bypassed the pulled pork burger coffee stop in the hope that a suitable coffee stop later in the day.

The destination today was Helnæs Light house. A tiny light house that sits on a tiny spit of land on the south west of Fyn. The round trip is only about 250km but with 80km/hr limits on most roads and 50km/hr in towns, of which there are shit loads, progress is slower than one perceives.

The ride out was pretty bloody great with several daisy diversions to some little country roads, large stately farm houses and tree covered lanes. Finally as we reached Helnæs the land fell away leaving only a little strip to access the island and we were suddenly surrounded by sea. The island itself was very small but had some nice narrow roads which eventually lead to the light house where we stopped to take in the scenery which today included included some tall ships rounding the point and of course get a coffee. Or so we thought, you guessed it in spite of the loads of visitors all walking around and taking in the scenery which included some tall ships rounding the point not a bloody cafe in sight. So we saddled up and took a more direct route back to Kolding for coffee and sustenance at my favourite cafe.

Finally tightened up the Papillionaire town bike and pumped up the tires for her maiden voyage into town for a coffee. Boy these cobbles are bumpy. Now I know exactly how the Paris - Roubaix riders feel (apart from the whole elite athlete thing, 100s of Kms, excellent diet, training, speeds of 60kph etc that is)

Under Danish law you are only allowed to own one untenanted house, but you are allowed one "Summer house". Think Ozzie beach shack, UK holiday cottage or NZ Batch these are usually situated somewhere on the coast and usually small. The catch is you are not allowed to officially live in it and are only allowed to stay during the six months of summer.

You can own other properties but they must be rented ie they are considered business investments. As far as I can fathom its basically designed to ensure rich bastards don't have five huge houses sitting idle and people with no home. It also promotes the time with family and take a real holiday theme by making a small (some are log cabin sized) holiday house more affordable.

The sun is out and I'm over my man flu or more accurately Ebola Lite. Time to dust off the Beemer and tests this windscreen.

The route was a test of my ability to program my GPS with a downloaded route of the Daisey Route. I loaded the section I wanted to follow pressed go and headed north to Århus. The ride followed freeways at 110 and 130kph so gave a good test of the screen.

And the results? Well it certainly takes the presume off the body but it buffets my helmet around and the once noiseless Scubert C3 now is drumming if I open the vents. The vibration is similar to my R1200GS stock screen when upright with the result being that my eyes jitter for an hour or so after the ride as my brain has got used to the vibration and compensated. For me (6 foot with longish torso) the design is may be 2 inches too tall and/or the rake is too steep. The turbulent zone is too deep at about 20cm when it hits the rider. The still zone is fine and the laminar zone is quite. Swept back screens tend to reduce the turbulent zone depth and allow laminar flow over helmet and have a high still zone, they do however provide higher pressure in where the thinner turbulent zone hits the rider (hopefully at shoulder height).

I'll keep it going for a bit before I piff it or take the jigsaw to it as removing it is too much hassle. Lets see how I adap. I may try the power bronze it looks like it is swept back more and also looks easier to trim down if needed.

The ride? Well more manual Daisey chasing I'm afraid as the GPS route stopped giving directions just after Århus (yes I know a first world problem) . I lost the route and road aimlessly through suburbs until I spotted a fellow motorcyclist that I hoped was heading somewhere nice. Sure enough, a daisey appeared, so for a short while nice curves at 80 following the coast northwards through villages and summer house areas. It even took me past the Rosenholm Slots.

This didn't last too long as I encountered the "Margueritruten special" an unmarked T intersection. Taking the wrong turn lead to some nice roads but mostly less desirable ones that didn't resolve to anything useful. I had run out of puff and needed coffee so hit the home button on the GPS and zoomed back to Kolding.

On this coffee  thing. Denmark has many small villages but their adoption of the cafe culture and espresso machines is immature at best. So the destination coffee shop ride list is empty so far. You can go all day and not pass a cafe.

Good to be back on the Beemer.

Took delivery of my new Wunderlich touring screen for the F700GS today. Took about 1 hour to install as tollerances were quite exact and headlight needed to be removed and re aligned. You can see result for your self but I'm a little concerned it maybe too large and/or not raked enough rearward. It certainly looks the part and purpose made for this Beemer. It gives the bike an overall bigger GS look. Now for a test ride.

Just got back from our first motorcycle tour on the new beemers in heat wave conditions for Europe ie 36deg here's the route. 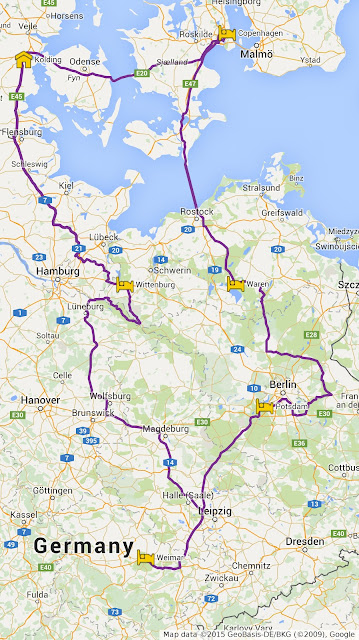 Today we rode north to Rostock at the top of Germany where we took a ferry across to Denmark and rode north to Copenhagen to visit my friends Ange Tim and Ella who were staying there for a week.

The ride was pleasant if not exciting and the ferry trip was 2 hours so I managed a little kip on the deck in the sun. By the evening we had arrived in Copenhagen and met up with my friends at the little apartment they had rented.

The next day (hot again) we decided to take the train north and visit the Louisiana Gallery that had an African exhibition on the go.  Louisiana is a spectacular gallery set within the rolling grounds of its sculpture park  featuring sculptures of Max Ernst, Henry Moore, Alexander Calder, Jean Dubbufet and Joan Miró. All of this overlooks the coast with glimpses of Sweden on the far shore. This is a must see if you come to Copenhagen

We return to Copenhagen and decide that we had not had a good enough catch up so we stayed another night in the sweltering heat and I made nachos for all for dinner.

Next morning we headed out for the 3 hour motorway ride back to Kolding so Gerty could get to work. 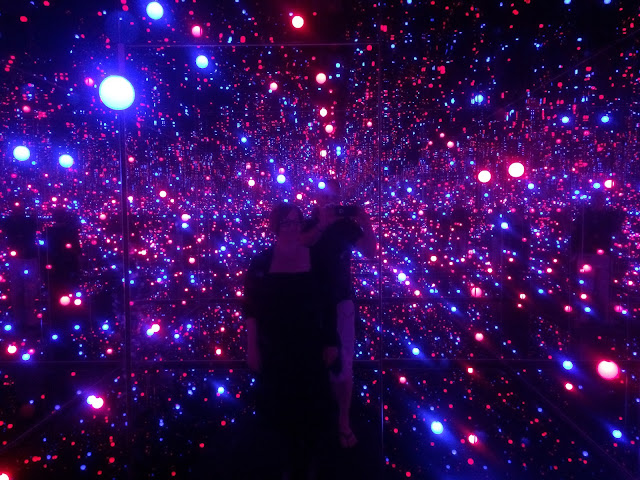